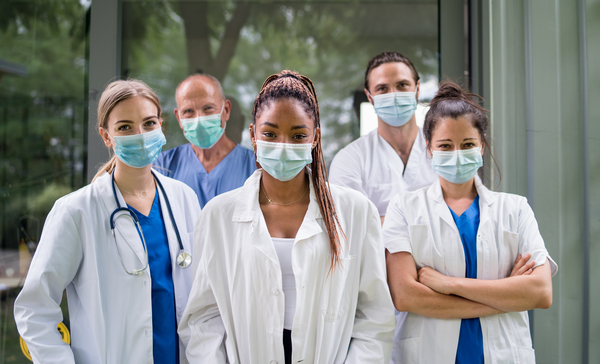 When people rolled up to the Desert Mission Health Center in Phoenix to get COVID-19 vaccines last April, they were offered more than a lifesaving jab through the car window. Many also drove away with a trunk full of nutritious food.

That’s because the affiliated federally qualified health center (FQHC), part of the very large HonorHealth health care system based around Phoenix and Scottsdale, had partnered with the health system’s Desert Mission Food Bank, which was already in place to address food insecurity among patients. Providers and volunteers, including some from the National Guard, did what they do best to help a population of people traumatized by job loss, illness, and death.

“We called it ‘food as medicine,’” says Sue Sadecki, executive director of HonorHealth Desert Mission and Community Services. “When the vaccination event was being planned, we thought, ‘Let’s put some food bags together with some good produce and make it something special.’”

The effort was just one of a number of HonorHealth’s out-of-the box efforts to address COVID-19 vaccination alongside peoples’ other disparate needs during the pandemic.

If any health system is poised to overcome the challenges of COVID-19, it would seem to be HonorHealth. Encompassing six hospitals, an acute-care center, and a 350-doctor medical group, the system is affiliated not only with the FQHC, but also with a human services campus that provides everything from adult day care for people with dementia to a child development program — along with the 10,000-square-foot food bank, “the only hospital system that has a food bank as part of its network”, says Priya Radhakrishnan, MD, HonorHealth’s vice president for health equity.

A Legacy of Service

Indeed, a sense of mission has infused the institution since its beginnings as a refuge for people with tuberculosis. In the early 1920s, people with respiratory ills flocked to Phoenix’s desert climate and set up tent cities in order to improve their lung health.

Desert Mission, which included a medical clinic and a food pantry, was founded in response. These and other programs would later morph into a hospital.

“Service has always been part of our DNA,” Sadecki says.

More recently HonorHealth, which was formed by the merger of John C. Lincoln Health Network and Scottsdale Healthcare in 2015, has committed to addressing the social determinants of health — factors like poverty, the environment, and access to food and transportation that can affect a person’s well-being. Programs designed to address the region’s health disparities would play a big role in the system’s COVID-19 response.

And, in a uniquely prescient move, in 2018 HonorHealth established a hospital biopreparedness initiative, designed for just such an event as the COVID-19 pandemic. It included having plenty of personal protective equipment on hand and infectious disease training for frontline staff. When COVID-19 came calling, the system was ready.

Addressing Hunger During the Pandemic

Helping patients become more food secure was a goal from the very beginning of the COVID-19 outbreak. Prior to the pandemic, the hospital had already begun screening patients for social care needs at some of its clinics (69,000 patients have been screened so far), identifying those in need of food assistance and making them aware of its unusual resource.

But when COVID-19 hit, people stopped coming to the hospital-based food bank, so it had to boost its outreach. Frontline health workers were the first recipients. Desert Mission set up food drive-thrus at the hospitals and $2 meals in the cafeterias for health workers, who were working such long hours treating COVID-19 patients that there was no opportunity to shop. Later the food bank established food pantries at local school resource centers and community organizations to get food into the hands of those who needed it.

“It was a matter of meeting people where they are and doing things we hadn’t done before,” says Sadecki. “In the old model, we expected everybody to come to the food bank. Now we were literally taking the show on the road.”

When COVID-19 vaccines appeared on the horizon at the end of 2020, other plans were hatched.

“I said, ‘This is our moon shot,’” says Stephanie Jackson, MD, senior vice president and chief clinical officer at HonorHealth. “We prepared multiple contingency plans not knowing which vaccine would make it to the finish line first, and that allowed us to be ready to go on day one.”

After health care workers received their vaccinations, HonorHealth quickly established the first mass vaccination event in the region at one of the health system’s corporate centers. The center was closed, leaving its large parking lot empty.

“We used a process improvement approach to design the site so we were able to be efficient, have smooth flow, and be customer-centric,” Jackson says.

The team came up with an eight-lane drive-thru, which was staffed by a small army of volunteers, staffers, medical residents, and medical students. People used a cell phone app to schedule their vaccines. The event ran for several weeks, eventually vaccinating some 75,000 people.

In the spring of 2021, the health system’s approach began to shift.

“Obviously, the initial impetus was to get as many people vaccinated as possible,” says Radhakrishnan. “But early on we saw that the majority were white and from affluent areas, so we started mining our medical records and identifying patients who belonged to underrepresented minority groups.”

Her team used the Centers for Disease Control and Prevention’s Social Vulnerability Index and overlayed the dataset on to the HonorHealth’s electronic medical records dataset to identify eligible patients.

“We identified vulnerability based on age first, and then whether they belonged to certain ZIP codes,” Radhakrishnan says.

These patients received messages through the patient portal. But volunteers also followed up with phone calls to see if patients were vaccinated, and if not, to get them on the schedule.

The health system also dispatched a mobile van to the auditorium of a downtown church with a large Black congregation and to other sites, including Desert Mission’s adult daycare clinic, to administer vaccines.

At the same time, HonorHealth set up a vaccine drive-thru at the affiliated FQHC, known as a Neighborhood Outreach Access to Health (NOAH) clinic, at the Desert Mission Health Center. That’s when the team decided to give food with vaccines.

“Using this as an opportunity to offer food was a no-brainer,” says Sadecki. “We ended up supplying close to 5,000 bags.”

The experience could be humbling. When one man drove up in a BMW, staff initially hesitated before asking the driver if he would like groceries in addition to his vaccine.

“But someone said, ‘We can’t judge someone by the car they drive. We have no idea what this individual is going through. We’re here to share, care, and resolve problems,’” Sadecki remembers.

It turned out that the man had recently lost his job and was grateful for the bag of food.

“The pandemic leveled the playing field and showed us we’re all in this together,” Sadecki adds.

In the end, the vaccine operation resembled an intricate ballet, Radhakrishnan says. “The choreography and coordination was painstaking and hard,” she says, “but we were able to get it all done.”

“Our strategy has shifted to identifying vaccination status in our medical records and encouraging all of the primary care doctors and advanced practice providers to make sure that they address the importance of vaccination,” says Radhakrishnan. Still the team stands ready to fire up a large vaccination campaign when or if vaccines for small children are approved.

HonorHealth’s leaders believe that its COVID-19 response and vaccination challenges have had an invigorating effect on the people who work at the system, with staff scouting for new opportunities to fulfill its mission.

“Now that we’ve seen we are able to pivot, innovate, and be helpful in new ways, the question is, what new heights can we reach?” says Sadecki. “It was an exceptional opportunity for us on a lot of levels — and we want to keep being exceptional.”

Beth Howard
Beth is an award-winning writer who covers health and medicine for U.S. News & World Report, The Wall Street Journal, and Prevention, among others.
SHARE:
Topic:

Check out these resources below from the Vaccine Equity Cooperative team!

Innovative educational materials delivered by community partners of academic medicine can encourage individuals who haven’t yet, to get the shot.