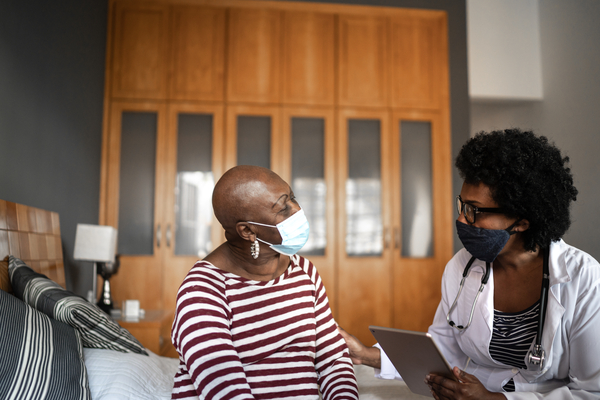 At a tin-roof brick house in rural Louisa, Virginia, an elderly woman sits outside on a folding chair smoking a cigarette, as a Ford Focus with government plates pulls into her driveway.

Carrie Smith, LPN, with the state’s 6-county Blue Ridge Health District, and Karen Thomas, PharmD, a pharmacist with UVA Health, exit the car, smile, and introduce themselves. The woman smiles back.

Smith and Thomas have driven 45 minutes from UVA University Hospital in Charlottesville to give her a COVID-19 vaccine. Their work is part of a joint program between the Blue Ridge Health District and UVA Health for homebound individuals. The long drive is not unusual. Teams can drive up to 2 hours one way, typically making 5 stops in the morning and 5 in the afternoon, 2 days a week, through wildly different parts of Virginia. On this March morning, their shift begins at a city apartment across from an auto repair shop and ends with a bucolic drive past rolling farmland and grazing horses.

The scenery may vary, but the mission remains the same: To provide the COVID-19 vaccine and boosters to individuals — many of them elderly — who struggle to leave their homes. Their numbers are growing. The number of homebound adults aged 70 and over rose from roughly 1.6 million in 2019 to 4.2 million in 2020, according to research published in August 2021 in JAMA Internal Medicine. Homebound rates were highest among non-Hispanic Black and Latinx populations.

Many homebound patients have chronic conditions — including heart disease, arthritis, diabetes, or cancer — that can increase their risk for COVID-19, the U.S. Department of Health and Human Services (HHS) reports. More than 73% of homebound patients have 3 or more chronic conditions, HHS notes, which can make it difficult to get the vaccine. Some have mobility issues that prevent them from leaving their home. Others live alone and can’t drive. Some live in rural areas and can’t easily reach distant vaccination sites.

For patients and staff alike, in-home vaccination can change lives.

“I told all of our vaccinators, ‘Please, take a homebound shift, just do it once so you can have that experience of seeing a patient in their home, see the appreciation on their face,” says Justin L. Vesser, PharmD, MS, director of ambulatory pharmacy services for UVA Health. “It’s really powerful.”

Here’s an inside look at the challenges and successes of 2 prominent vaccine programs for homebound patients.

When New York City became the epicenter of the U.S. COVID-19 outbreak in the spring of 2020, homebound patients in Mount Sinai’s Visiting Doctors Program (MSVD) were hit hard. Since 1995, the program has provided home-based primary and palliative care to older adults who are chronically ill and live in Manhattan. MSVD typically serves about 1,000 such patients, many in their 80s, though it’s not exclusively a geriatrics program.

.“We had a large number of patients pass away in the first big wave that hit New York,” says Peter Gliatto, MD, MSVD’s director and professor of medicine, medical education, and geriatrics and palliative medicine at Icahn School of Medicine at Mount Sinai.

In March 2021, then-mayor Bill de Blasio announced an effort to vaccinate homebound city residents using the Johnson & Johnson vaccine. The city agreed to provide MSVD with 600 doses to vaccinate not just patients but caregivers as well. Some of MSVD’s 1,000 patients had access to vaccines through other means such as congregate housing programs, or because caregivers took them to vaccination sites.

The program faced a variety of logistical challenges. Once prepared, the Johnson & Johnson vaccine needed to be stored between 36°F to 46°F ad used within six hours.

“We had to rig up coolers to bring them out to people,” Gliatto says. “Early on it was difficult because you really felt bad if you wasted a dose, so we were super careful about scheduling and being careful about geography and making sure that everybody was close. If we had 4 vaccinators going out, we would try to do 20 vaccines because Johnson & Johnson came 5 in a vial. That was our magic number.”

After concerns surfaced that the Johnson & Johnson vaccine could cause a rare blood-clotting disorder, the program paused for 10 days in accordance with CDC guidance, and MSVD now uses Pfizer vaccines, primarily for boosters. Tracking boosters, however, has provided another logistical challenge. The city maintains a vaccination registry -- MSVD’s electronic medical record is linked to it -- but there’s often a lag between when someone receives the booster and when the information appears.

“One of my patients visited her daughter in Jersey the other weekend and got her booster, but that’s not in the system,” Gliatto says.

Perhaps the biggest logistical challenge involves scheduling. Because the program works with an elderly population, phone calls are more effective at reaching patients than emails or texts. According to HHS, 15% of homebound individuals lack access to a computer, smartphone, or tablet.

“We don’t want to waste doses, so getting enough people on a given day, in a given area, requires a ton of phone calls,” he says.

The efforts have paid off. Roughly 90% of MSVD patients have been vaccinated (nearly 70% of those have received boosters). MSVD has approached all of its patients about boosters (a few have declined), and as of March 14, only ten patients were on the waiting list for a vaccine dose. Once those final patients have been reached, MSVD will vaccinate people on an ad hoc basis — or until there is further guidance about new boosters.

“As with everything with this pandemic, you’ve got to plan for now,” he says, “but be ready to pivot quickly.”

Thomas and Smith had started their morning in at a 2-story apartment where they had a homebound patient. This was before their drive to rural Louisa.

“I think we’ve been here before,” Thomas says in the parking lot. It’s entirely possible: The vaccine teams cover a lot of ground. Since March 2021, vaccinators have given 1,185 doses to 846 homebound individuals — and patients are grateful.

Loneliness is common among homebound patients, and many are eager not to only to receive a vaccine, but to talk. Some patients request favors. One woman asked Smith to hang up her coats. Another asked if nurses could buy her items at a grocery store.

“Unfortunately, we had to say we’re not here for that — we’re only here to give the vaccine,” Smith says.

Before visiting homebound patients, UVA worked with the Blue Ridge Health District to offer pop-up clinics and mass vaccination sites, which provided roughly 1,500 shots a day. That led to discussions about how to “equitably distribute vaccines to people who couldn’t just get in a car,” Vesser says.

Once the homebound program was launched, the biggest challenge was spreading the word. Initial referrals came from local adult protective services agencies and organizations such as Meals on Wheels as well as from physicians with homebound patients. More referrals came once UVA Health established a vaccine call center, and when county health departments posted information on their websites.

Each partner provides complementary strengths. The Blue Ridge Health District maintains relationships with different organizations to identify patients and schedule their visits. UVA Health provides the vaccine, the vaccinators and the software to record the doses. The Charlottesville fire department also played a role. Initially, a firefighter would drive the vaccinators to homes, which provided credibility to help counter vaccine hesitancy and COVID-related fears.

“That was important because everybody was afraid,” says Vesser. “Firefighters opened the door to lots of places that would not have opened for us — the level of trust would not have been there without that uniform.”

The firefighter would also conduct home safety checks, inspect smoke detectors, and even replace them if necessary; drivers are now provided by the Blue Ridge Health District.

As of mid-March, 90% of adult home vaccination visits now involve boosters, but vaccinators are also inoculating homebound pediatric patients; some, for example, are autistic and respond better to vaccination at home. UVA Health has reduced its homebound program from 3 to 2 days a week, but Vesser says the schedule remains full.

For Vesser, COVID-19 vaccines have created a foundation to provide homebound patients with care beyond the pandemic. UVA Health has also developed connections with new organizations, particularly in African American and Latinx communities. On a personal level, Vesser says he better understands the physical, emotional, and economic challenges facing many local homebound patients — and patients have also gained a new view of UVA Health.

“UVA is a big health system, and a lot of people out there might have the impression that the world has forgotten about them. That can lead to bitterness and distrust of big systems like us,” he says. “But being able to show that people from UVA care about you, and we want to help meet your needs, and we’re not charging anybody for this — we don’t get any reimbursement for homebound shots — we’re doing it because it's the right thing to do. That’s what I’m most proud of.”

Ken Budd
Ken is an award-winning writer who covers travel and health for The Washington Post Magazine, Travel + Leisure, and The Atlantic, among others.
SHARE:
Topic:

Article
How PCPs Are Meeting the Challenges of COVID-19

Having adapted to meet patients’ health care needs during the pandemic, PCPs are now looking to eConsults as another tool to manage COVID-19 related issues.

The Advancing Health Equity Through Telehealth Learning Series aims to highlight the role of academic medicine in promoting and advancing health equity.

Arizona’s HonorHealth has relied on creative methods to get vaccines to everyone.