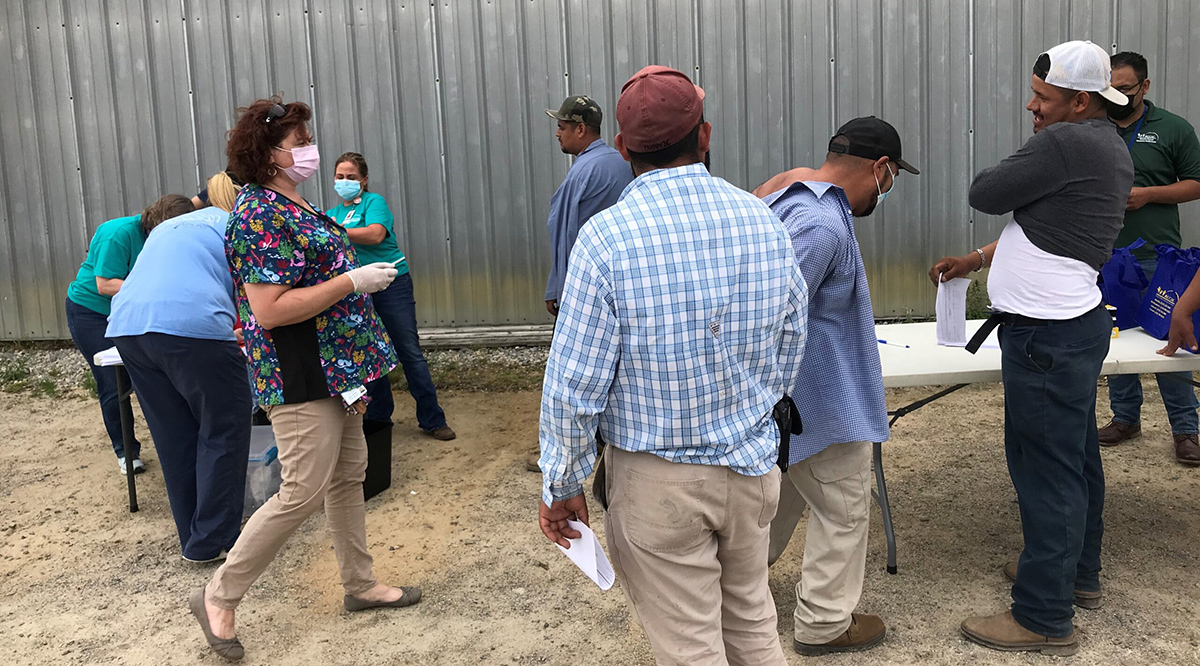 Every year beginning in March, thousands of migrant farm workers board buses in Monterrey, Mexico, and travel the 1,600 miles to Vass, North Carolina, where they disperse to farms across the region. For the next nine months or so, they tend and harvest crops like tobacco, cucumbers, and sweet potatoes.

But this year, when the farm workers stepped off the bus, they had a welcoming committee: doctors and nurses offering vaccines against COVID-19.

“I won’t forget the date — March 3 — when farm workers were eligible for vaccines,” says Juan Allen, a patient navigator with Access East, a nonprofit that provides health services to vulnerable populations in eastern North Carolina, which is spearheading the effort. “We had been waiting for approval since last November and had 200 guys ready for shots.”

These vaccination events are part of an ambitious campaign by Vidant Health, a nine-hospital academic health system serving more than 1.4 million people in 29 eastern North Carolina counties, in concert with the NC Farmworker Health Program. Over the last six months, thanks to the mass events, roving mobile vaccination units, and collaborations with local health agencies, nonprofits, and community groups, Vidant has managed to vaccinate a staggering 96% of these workers — a key part of keeping COVID-19 under control in these rural communities.

“That’s higher than the general population,” says Shantell Cheek, RN, director of uninsured programs for Access East, which is an affiliate of Vidant. “By providing the education, the means, and the resources together with our partners, we’ve been extremely successful.”

Some 17,000 to 18,000 farm workers come to this region of North Carolina every year under the H-2A visa program, which gives them temporary agricultural employment status. In December 2020, the CDC prioritized agricultural workers as frontline essential workers, recommending them for vaccination under phase 1b of the COVID-19 vaccine rollout — and for good reason.

“Farm workers are first in the food chain,” says Cheek. “They are also a population that, although usually remote and isolated in farming camps, are still integrated within our community and our system.”

“It’s a risky occupation,” adds infectious disease specialist David A. Wohl, MD, a professor of medicine at UNC Health in Chapel Hill, who has partnered with Access East to administer COVID-19 vaccines. “People are close together, sometimes elbow to elbow, and there’s not a lot of masking,” he says. Many workers also live together in close quarters.

But “for every person we prevent getting infected,” Wohl says, “models show that we’re basically preventing six to eight infections from that one person.”

The program’s success can be chalked up in part to Access East’s already familiar presence to farmers and growers in the agricultural counties of eastern North Carolina. Long before COVID-19, the organization was on the ground, signing up workers for health insurance and medication assistance programs to help them treat conditions like hypertension or diabetes and providing them onsite dental care through the school of dentistry at East Carolina University in Greenville.

The groundwork for the COVID-19 vaccination campaign was laid last year when the pandemic threw communities into chaos, including farming communities. “There were massive outbreaks at the camps in the beginning of 2020,” says Cheek. “We provided COVID testing, face masks and sanitizer, whatever the farm workers needed. We were able to do that due to the existing relationships that we have throughout the region.”

Before the start of the 2021 growing season, Vidant provided informational pamphlets and put up yard signs at farming camps with a toll-free number so workers could access information. The organization also worked with growers to get them on board with COVID-19 vaccination when approval came.

Some farm owners were initially ambivalent due to circulating vaccine misinformation, Cheek says. “But our established relationships helped growers know we weren’t taking a political stance. We were purely providing education,” she says. “It also helped that when somebody got COVID, we were there to help with quarantining and making sure it didn’t spread to the other farmers because it’s a loss of revenue for the grower.”

The organization started to see a trickle of workers in March. “By April and May, there were lots of buses coming into Vass — anywhere from 400 to 600 guys in a weekend,” Cheek says.

But vaccinating those arriving by bus was only one part of the operation. Not all farm workers travel back and forth through the year; some remain in the region with their families. Others are brought in by contractors on an ad hoc basis to assist growers who own small farms, where help with harvesting a crop may only be needed for a few weeks or months. (Although the vaccine program targets visa holders, other workers are allowed to get vaccinated and in North Carolina, documentation isn’t required.)

“It was really important to capture them as well,” says Cheek. “We would deploy actual units out to the camps.” UNC Health volunteers, led by Wohl, provided the staffing.

Federally Qualified Health Centers (FQHCs) in the region — which, like Access East, offer basic health services to underserved populations — also helped put boots on the ground. “They could dispatch vaccines to the most rural areas that we couldn’t get to as readily,” Cheek adds. “It takes collaboration.”

Farm workers, like the general public, are also susceptible to vaccine misinformation. The challenge of getting them to roll up their sleeves fell to Allen, a native Spanish speaker. His approach was to first identify the leader in a group and to gain their confidence by addressing other health concerns.

“Then when they have an issue, they immediately call you, like someone has had diarrhea for a day or two,” says Allen. “We create rapport with them. So now they think ‘Okay, these guys are helping us.’ I have people who, at the moment they arrive in North Carolina, will call me and say, ‘Hey, Juan. We are here now.’ Then I go and visit with them and bring the rest of the team with me.”

When the vaccine team goes to a camp, Allen says, they’re typically invited to dinner with the workers. “If you want trust, we need to at least sit with them and eat a little bit,” he says. “When you eat with the men, they feel it’s okay. It’s an important interaction to do in order to get it across.”

UNC Health supplies the COVID-19 vaccines for such visits. “We worked with Access East on testing, and it just became clear that we could help with vaccination, because they have access to farm workers, but they don’t have vaccines,” says Wohl, who gained field experience with infectious disease control during Ebola outbreaks in West Africa and the Democratic Republic of Congo. “And we have vaccines, but we don’t have access.”

Wohl was gratified to see the effort’s ripple effects. “We’d see farm workers come in, get vaccinated, and then come back with family members,” he says.

The team also went door-to-door in mobile home parks. In one case, a teenage girl was reluctant to get the shot. “We sent in a woman who spoke Spanish. She talked to her and gave her the vaccine right in her own home,” says Wohl. “That made the difference. She wouldn’t have done it otherwise.”

Vidant has also relied on COVID-19 vaccine champions in migrant communities. The owner of a Mexican tienda (store), was one such ambassador. “When people came into the store to buy things, she would ask them, ‘Do you want to get vaccinated?’” says Wohl. “She sent everyone who came in our way. It showed community buy-in and caring. We looked for those kinds of community partnerships.”

A similar scenario played out at a popular Mexican restaurant in the area. “We knew that we had a captive audience,” Cheek says. “We vaccinated 41 people that day. As with anything in public health, it takes the work and the resources of us all working together and collaborating for a common good. We can’t do this by ourselves.”

“Our mission at Vidant Health as a whole is to be a model for how to care for a rural community,” says Kelli Pack Smith, MPH, vice president of medical affairs at Vidant Health in Greenville. “We do what we have to do to get it done.”

Beth Howard
Beth is an award-winning writer who covers health and medicine for U.S. News & World Report, The Wall Street Journal, and Prevention, among others.
SHARE:
Topic:

Innovative educational materials delivered by community partners of academic medicine can encourage individuals who haven’t yet, to get the shot.

In-home vaccinations are saving the lives of those who can’t travel to receive a COVID-19 shot.